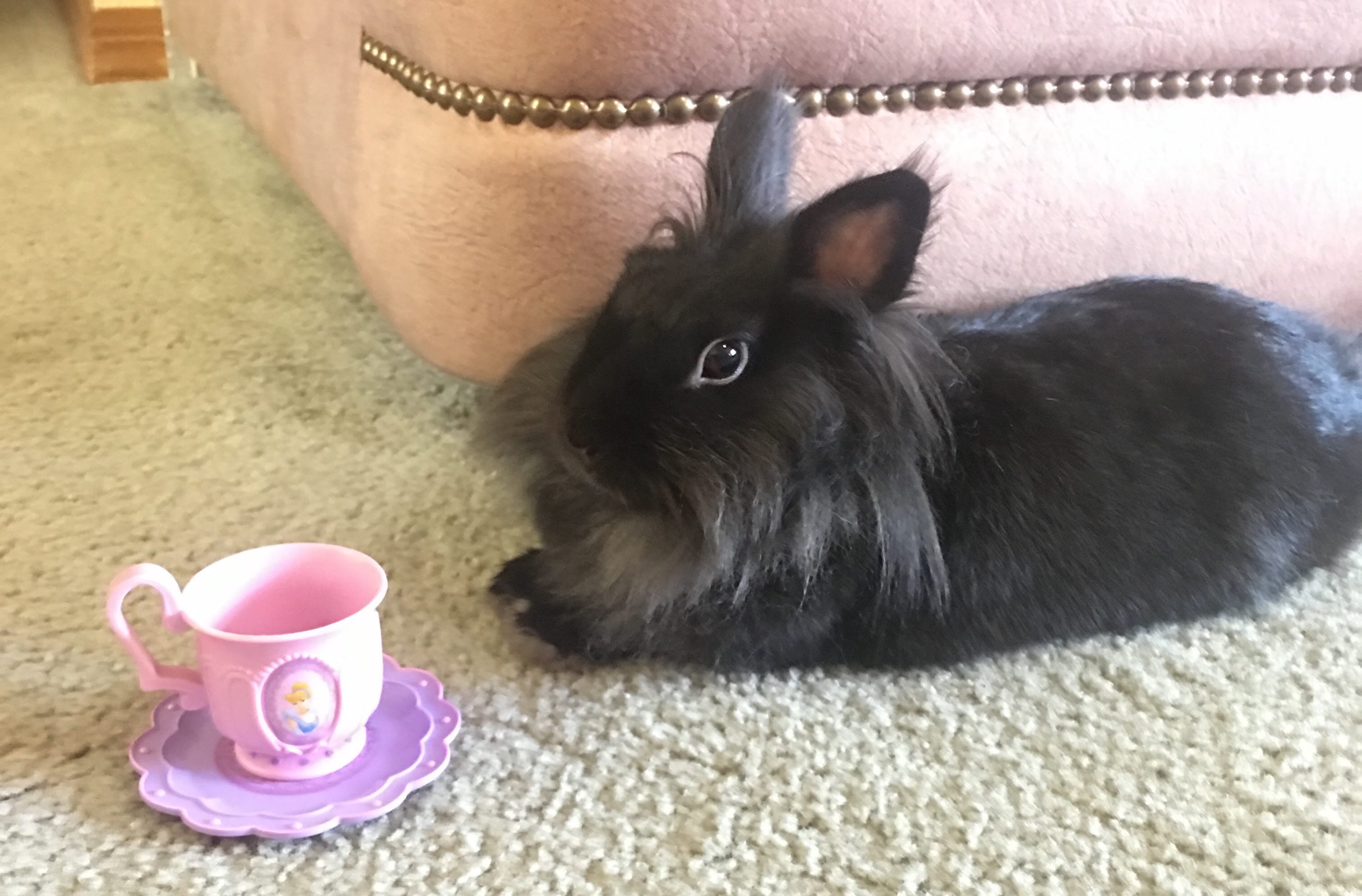 Have a spot of tea and read about me!

Hello, my name is Freedom. I am a half dwarf, half Lionhead rabbit. The Lionhead part gives me my mane and fluff. Mama brought me home when I was a year and a half old, and I’ve never been bored since.

This picture is one of me relaxing at our main house (that doesn’t move) in Florida. I have a little girl. She likes to serve me pretend tea and then breaks into giggles when I pick the teacup up and throw it.

My first camping trip was about a month after I arrived at home. About a week before we left Mama got out this weird thing she called a “carrier”. She would leave the front flap down and put yummy things like carrots in it or a new toy. Every time I hopped in there she would fuss over how brilliant I was. Life was good.

Then it was time to leave. Everything was chaos. Mama kept packing stuff up and flying around the house. She kept talking to me about “adventure” and how she needed me to be OK and stay alive for her. That was comforting. Apparently I have an official title. I’m an Emotional Support Animal. Whatever that means.

Anyway, so Mama goes over to my carrier…and the sides flip down. It’s now three times as big! But then she starts moving my stuff. Like my litter box and hay…into the carrier. Then she acts like she’s going to pick me up!

Now, I’ll admit, compared to the tall cardboard box I came home in, this place is a palace. However, I am a bunny. We prefer to stay on the ground. Suddenly I’m in the truck, which I’ve never been in before, in my carrier, and most of the stuff Mama’s been packing for days is in the truck with us. I start breathing heavily, until I note that I actually have the most room of anyone else comparative to size. I start to relax. Then the truck moves. After being frozen in place (minus the swaying I had no control over) for several minutes, we finally stopped. I was so relieved! It was a lot shorter than the ride home, but now I’m wondering…am I getting another family again…already?

Well, the good news was nope, no new family, because I’m really starting to like this one. What I got was a new second home. They call it the “home on wheels”. Whoa. This thing was WAY smaller than home home. But it was kind of cool, because it was small like me, so I could actually see everything that was going on at all times. The downside was…my view.

Our first camper was called Hideout. The only place my “condo” fit was…in the shower. Which faced…the toilet. Oh, the shame! Plus, the shower was elevated, so Mama set up this ramp for me, which I totally hated. Sometimes I could just spectacularly clear it, and other times I would crash. It did work fine when I used it “properly” as Mama would say, but I didn’t like it, so I rarely did.

Mama does this thing a lot called “praying”, and says “thank God” a lot, so I’m going to use it here: Thank God we got a bigger camper!

Big Rabbit (my name for Mama’s husband and Little Girl’s daddy) had convinced Mama we should get a bigger camper before the next “big trip”. The actual buying of this bigger camper is an entirely different story, one that I’ll consider sharing later.

My first camping trip was to this place called Stone Mountain in Georgia. Remember when I was glad the short truck ride was over? Yeah. That was just to L.L., where Little Girl’s grandparents live and let us keep our camper. I had NO idea how long I would be in the truck that next day! It was pretty traumatic, but Mama made all over me for being such a good traveler, and I discovered camping means vacation, which is also synonymous with more treats than usual for everyone. I decided camping could be ok.

Since then, we camp about once a month or more. When I first arrived it was every other weekend. Now we seem to go every three to four weeks, but we’re staying for longer periods of time.

My first “big trip” we did what the humans called “the entire Eastern Seaboard.” One of the prettiest places we stayed was Bar Harbor, Maine. I know, because in our bigger camper (named Grey Wolf), I have my own bunk bed. I have the top bunk, with my own window (I’m told it’s the best view of the entire camper because it’s the highest), and Little Girl has the bottom bunk. These bunk beds are twice as wide as Hideout’s, so Little Girl often climbs up and reads next to me.

I’ve now been a camper for over two years. Early on, when I did so well at “not dying”, Mama dubbed me “Freedom, the Traveling Bunny”.

Like I said, I’ve never been bored since coming to my Forever Home. If you’re interested in reading my diary, fill in your email address so you’ll get updates. My time outside of the camper is limited, but I see and hear much, and have lots to say. This blog is about my life, from my perspective. I hope to provide you with some laughs while giving you glimpses into a traveling bunny’s life.